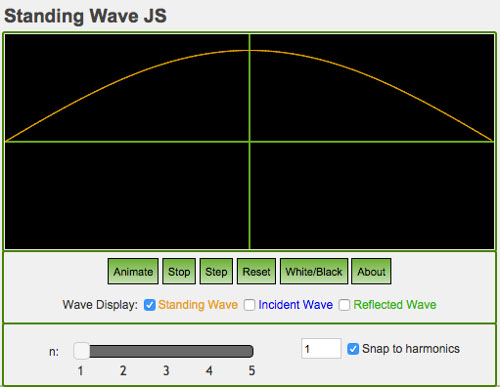 The Standing Wave application was developed as a more user-friendly version of the original applet coded in Java. This application provides users with the ability to control the wavelengths of incident and reflected waves in order to create a “standing” wave.

Users may choose which waves they would like displayed by checking the checkboxes accordingly as well as changing the background by using the White/Black button. The animation can be stopped and starting using their respective buttons, but there is also the feature to step through each animation frame to get a better visual of the wave functionality.

The application utilizes extensive jQuery and the jQuery-UI library in order for the slider included in the user interface to control all of the animations on the canvas at once. Using jQuery also made it easy to implement the other UI elements and to provide functionality for viewing each wave independently or all at once depending on the checkbox selections. An added feature was the ability to alter the background contrast from black to white.

The core of the model lies in the slider in which a user may choose the wavelength of the animation. If the checkbox for the harmonic snap is unchecked, the user may position the slider in any position they choose and while the selection is not on a whole number the wave animation will eventually “die” due to the nature of the wave. Overall, the application is a simple way to visualize how incident and reflected waves react to form standing waves.